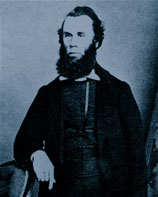 James Forbes was the oldest of the ten children (only five surviving infancy) born to Peter and Margaret Forbes who farmed “New Braes” on the estate of Sir Arthur Forbes in the parish of Leochel-Cushnie about 40 km west of Aberdeen, Scotland. He was baptised on 4 April 1813, and was educated locally and at Aberdeen Grammar School.

He entered King’s College, Aberdeen in 1826 and completed the Arts course in 1829 but, like the majority of students who regarded it as an expensive formality, he did not bother to graduate. The Church of Scotland’s Presbytery of Garioch records show that he was enrolled in divinity for part of 1829/30, 1830/31 and as a regular student 1831/32. He must have had doubts about his fitness for the ministry for he accepted a teaching appointment at the Colchester Royal Grammar School in England between 1832 and 1835. Here he experienced an evangelical conversion as he heard the sermons given in the school assembly by the Church of England preachers. This brought him back to the divinity course at Aberdeen which he completed in 1837.

Leaving Greenock on the 541 ton barque Portland on 24 July 1837, Forbes arrived in Sydney on 4 December 1837. The passengers included Dr Lang and a number of other ministers and teachers. Forbes rejected Lang’s proposal that the new ministers join him in forming the Synod of New South Wales to rival the existing Presbytery of New South Wales, and duly became a member of the Presbytery. His appointment being for the District of Port Phillip, he arrived there by boat on 20 January 1838.

He found his future father-in-law, Rev James Clow, had arrived in Melbourne to settle the previous Christmas Day. Clow was a Church of Scotland chaplain from Bombay retired due to health issues and of independent means. Forbes offered to go to Geelong, but Clow deferred to the younger man with an official appointment. Forbes thus became the first Christian minister settled as such in Melbourne, which was then a settlement of a few huts and two weatherboard houses that served as hotels. Within 18 months the population increased from a few hundred to 3000.

On Saturday 3 February 1838 a meeting of members and friends of the Church of Scotland was held with James Clow in the chair. It was resolved to build a church and that £300 be raised in order to obtain the matching grant available under the Church Act. This is regarded as the official birthday of Presbyterianism in Victoria and of the beginning of Scots’ Church. A committee of James Clow (treasurer), James Forbes and Skene Graig (secretaries) was appointed to collect subscriptions and to take the steps to obtain a church site. The sum of £139.19.0 was subscribed on the spot.

Forbes continued the afternoon service in the Pioneers Church on the corner of William and Collins Streets Street which had been commenced by Clow on 31 December 1837. Originally a non-denominational building opened in February 1837, the land on which it stood was reserved for the Church of England later that year, and in April 1838 Bishop Broughton advised it would not be available for the use of others once a priest arrived. The Presbyterians thereupon resolved to provide their own facilities. Forbes held services in Skene Craig’s property in Collins Street West until a temporary timber building called Scots Church was opened in July 1838 on David Fisher’s land next door. The location was the south side of Collins Street between the later Olderfleet and Rialto buildings (Lot 14 Section 2) where the Winfield building now stands. It was essentially a large room with a fireplace able to hold about 60 people.
The temporary building also served as the Scots’ Church School, which was begun on 26 November 1838 with Robert Campbell as teacher. He had come to Australia with Forbes and was a Scots’ elder from 1839 until 1842. The school prospered and soon had 80 pupils. The school relocated to new brick premises in September 1839 on the part of the present 2 acre site on the corner of Collins and Russell Streets which adjoins the present Baptist Church and on which Georges department store was later erected. The number of students was soon 150, a third of them girls, and two aboriginal children were among those who received prizes at the first examination in June 1840. The church services were similarly moved to the new school.

The first purpose built Scots Church on the present site, corner of Collins and Russell Streets, was opened on 3 October 1841. It was designed for 500 sittings and the contract sum was £2,485 without plastering, gallery, vestry or fittings. The building was opened with temporary seating on 3 October 1841, plastering was carried out the following year, proper pews, gallery and vestry were added in 1849 and a spire some years later. (The present building was opened 29 November 1874 seated for about 900.)

Forbes visited Geelong in November 1838 and obtained Rev Andrew Love from Scotland as minister for this place. Love arrived in April 1840. In 1842 three more ministers were secured and the Synod in Sydney approved Forbes’ request for a separate Presbytery of Melbourne to be formed. It held its first meeting on 7 June 1842.

Forbes was the founding honorary secretary of the British and Foreign Bible Society auxiliary founded in 1840, chairman of the Port Phillip Theological Education Society, assisted in the founding of what is now the Royal Melbourne Hospital and the Melbourne Debating Society, all in 1841.

In 1845 he inaugurated the Presbyterian Female Visiting Society. As it was not sectarian in 1847 it was renamed the Melbourne Ladies Benevolent Society. He supported aboriginal missions established by Wesleyans and Baptists, and was a true friend of all.

Reasons of distance and the general desire of those in Port Phillip to run their affairs without control from Sydney, meant Forbes organised a distinct body but on similar lines to the Presbyterian Church of Eastern Australia, formed as a result of the Disruption. Forbes gave up his handsome stipend (£200 from the government plus £150 from the congregation), the church, school and manse he had erected, and commenced afresh. He issued his Protest on 29 October 1846 and submitted it to the Presbytery of Melbourne on 17 November, the date of the organising meeting of what the minutes call The Free Presbyterian Church of Australia Felix. The first service was held in the Mechanics Hall (where the the Athenaeum now stands) on 22 November 1846 with about 200 people crowding the building.

The building of John Knox Free Presbyterian Church, Swanston Street was opened 8 May 1848 on the corner with Little Lonsdale Street and with frontage to that street. The John Knox School began in the building on 3 July 1848 with T.J. Everist as teacher. Within a year there were 120 students and an adjoining brick building came into use in August 1850. The congregation erected a two-storey manse next door to the church in Swanston Street late in 1850. [During Rev William Miller’s ministry the school closed and the school and manse land was sold to aid the reconstruction of the church. It was re-opened by Rev William McIntyre 26 July 1863. It now houses the Church of Christ congregation in the CBD.]

Forbes sought to obtain additional ministers for the Free Church. He apparently offended the Irish Church by some critical remarks on some individual Irish ministers who had not stood with him in 1846, so assistance came chiefly from the Free Church of Scotland. Thomas Hastie came from Tasmania in January 1847 and was settled at Buninyong and The Leigh, while Rev J.Z. Huie became minister at Geelong in the same year. Schools were established in both parishes. There was little other help until the explosion of population following the discovery of gold in 1851, the year of Forbes’ death.

The Chalmers Free Church School began on 4 June 1850 in purpose-built premises at what is now 257 Spring Street (opposite the Royal College of Surgeons) under George McMaster, an experienced Scottish teacher. The school was named after Thomas Chalmers, the first Moderator of the Free Church of Scotland Assembly. McMaster transferred to the Knox School In October and was replaced by George Knox until May 1851. At that point the students were transferred to the Knox school and the Chalmers’ premises stood empty waiting for the arrival of a rector from Scotland for Forbes’ proposed Academy.

Forbes was keen to see a superior educational institution which would provide an education in the higher branches of science and literature as ‘the first step towards the training of a Colonial ministry from among the Colonial youth.’ He personally sought and obtained the assistance of Miss Mure of Warriston, Edinburgh, to guarantee the salary of a rector and so make the project viable. The Academy opened in the Chalmers premises 6 October 1851, a few weeks after Forbes’ death, with Robert Lawson (1826-69) as rector.  The Academy moved to the south-west corner of Spring and Little Collins Streets (now 99 Spring Street) in 1852, and the Chalmers’ premises were let to an unrelated minister, Rev. William B. Miller. (David Baillieu, Hills of Home: A life of Robert Lawson (Melbourne 2009) 33-38 has confused this United Presbyterian minister with Rev William Miller, the successor to Forbes, and thus Baillieu’s conclusion that Scotch College operated in two premises for several years is without foundation.)

Of recent years Scotch College, located in Hawthorn since 1916, has rediscovered their founder. In 2002 the first stage of the impressive buildings of the James Forbes Academy (drama/music) was opened.