Prices noted are $A and do not include post and packing 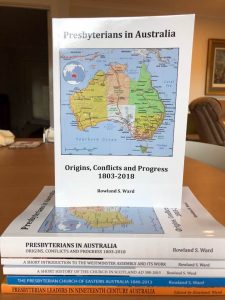 Religious Groups in Australia: Beliefs, History and Statistics will include introductory essays then entries on 300 or more religious groups classified by families.

The Rev John Waterhouse (1789-1842) and his Family (246pp, illustrated, colour; pbk, 2019) This is the first detailed account of the Rev John Waterhouse who served nearly 30 years as a Wesleyan preacher in important English circuits and three years in the South Seas based in Hobart as the General Superintendent of Wesleyan Methodist Missions in Australasia and Polynesia. He made two extensive and hazardous voyages to New Zealand, Fiji and Tonga. Three sons became Wesleyan preachers, three daughters led remarkable lives and several sons were prominent merchants in Hobart, or Adelaide. One of these established the American branch of the family in Honolulu in 1851. Another became Premier of South Australia and later Premier of New Zealand.  ISBN 978-0-9586241-7-6  $30

Presbyterians in Australia – Origins, Conflicts and Progress 1803-2018 (377pp. illustrated; pbk., 2018, repr. 2019). The author’s rather comprehensive work, The Bush Still Burns: The Presbyterian and Reformed Faith 1788-1988, published in 1989, has long been out of print. This new work simplified the structure and concentrates on the Presbyterian Church of Australia and its constituent state-based churches. It includes much new material and the earlier material has been carefully reviewed. It is essentially a theological and constitutional history, and covers the four cases (Strong, Ferguson, Angus and Cameron) where heresy was an issue.

Presbyterian Leaders in Nineteenth Century Australia
[1993, 192pp] 12 essays on 11 leaders by Peter Barnes, Stuart Bonnington, Barry Bridges, Peter Hill, Darrell Paproth and Rowland Ward, who edits the collection as well. This volume has been most positively reviewed in a number of publications, and provides a manageable introduction to 19th century Presbyterian witness.  ISBN 0 949670 24 3   $12

Australian Communion Tokens (with Melvin C. Williams who provides the photographs) [1992, 51pp] Special issue of the Journal of The Australian Numismatic Society, Sydney. ISBN 0959079629 Out of print

The Smith of Dunesk Mission: Forerunner of the Australian Inland Mission [2012, 48pp paper, illustrated; 2nd edition 2014] Provides the true explanation of Mrs Henrietta Smith’s interest in South Australia and how her gift was used. Describes the Mission given her name based on Beltana, South Australia 1894-1932 with detail on the Missioners including John Flynn and the author’s grandfather.  ISBN 978-0-9806757-5-7 $10 Out of print but is largely incorporated in Presbyterians in Australia (see above).

The Complete Book of Psalms for Singing with Study Notes
[1991, second printing 1994; 368 pages, full music, hardbound.] ‘This is beyond doubt quite the finest English language Psalter I have ever seen. The language is both majestic and modern; the words are Scriptural and simple; the tunes are nearly all very well known. This book merits a very wide circulation in the interests of true ecumenism.’ – Rev Dr F.Nigel Lee, Brisbane                  $15 generous discount for bulk orders

The Psalms in Christian Worship
[1992, pbk 144pp] A concise case for a capella singing of inspired songs in the worship of God’s covenant community, together with the history of the subject and brief notes on each psalm. Out of print

A Short Introduction to the Westminster Assembly and its Work (123pp., pbk, 2019) ‘An excellent supplement to standard commentaries and other studies on the Confession and Catechisms. I commend it highly’ – Dr Richard B. Gaffin, Jr.   ‘A fine concise introduction to the Westminster Assembly. Clearly written and very accessible, Christians everywhere will benefit from Rev. Ward’s learning, lightly worn’ – Dr Carl R. Trueman.     ISBN 978-0-648539940    Published by Tulip Publishing and available from booksellers in UK, USA and Australia    www.tulippublishing.com.au

Baptism in Scripture and History
[1991, pbk 80pp] A fresh study of the meaning and mode of Christian baptism with special reference to Old Testament background and early church history. ‘A very stimulating and important book.’ Dr Stuart Piggin, Macquarie University, Sydney   ISBN 0 949670 18 9   Out of print but available from this site www.rowlandward.net

God & Adam: Reformed Theology and the Creation Covenant
[2003, pbk 208pp] The first monograph in English providing a detailed survey of the development of the covenant of works. ‘Ward has done a remarkable job in summarizing the issues at stake.’ Mark G. Johnston, Grove Chapel  ISBN 0 9586241 6 X  Out of print but updated edition in several formats with recommendations by leading Reformed scholars available from UK, USA and Australian bookshops. Published by Tulip Publishing Sydney in 2019: https://tulippublishing.com.au/book/god-and-adam/

pages 17-48 of the above [“Creation and Covenant and “The Biblical Unfolding of the Covenant”] were translated into French by Paul Wells and published by Editions Kerygma of Aix-en-Provence in 2007 under the title Vous Avec Dit “Alliance”? – Dieu et l’être humain selon la Bible: une relation dans le temps